(Conduct) Rules 1964-transcations in sale & purchase of shares and debentures etc. As per provisions of sub-rule (4) of Rule 18 of the CCS (Conduct) Rules 1964, a Govt. Servant is required to furnish a full and complete statement of moveable and immovable. Prior intimation under Rules 18 of CCS(Conduct)Rules,1964 in respect of transaction of immovable and movable property-reg. Download (336.54 KB) Administrative Matters. The undersigned is directed to say that in accordance with the provisions of sub-rule (2) of the Rule 18 of the CCS (Conduct) Rules, 1964, all Government servants coming within the purview of these Rules are required to make a report to the prescribed authority before entering into any transaction of immovable property in their own name or in.

(1) Subject to the provisions of sub-rule (2), no Government servant shall, except with the previous sanction of the Government-

(a) engage directly or indirectly in any trade or business, or

(b) negotiate for, or undertake, any other employment, or

(d) canvass in support of any business of insurance agency, commission agency, etc., owned or managed by any member of his family, or

(e) take part except in the discharge of his official duties, in the registration, promotion or management of any bank or other company registered or required to be registered, under the Companies Act, 1956 (1 of 1956) or any other law for the time being in force, or of any co-operative society for commercial purposes. 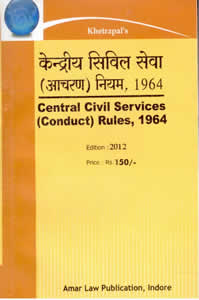 (i) a sponsored media (radio or television) programme; or

(ii) a media programme commissioned by Government media but produced by a private agency; or

(iii) a privately produced media programme including video magazine:
Provided that no previous permission shall be necessary in case where the Government servant participates in a programme produced or commissioned by Government media in his official capacity.

(2) A Government servant may, without the previous sanction of the Government,-

(a) undertake honorary work of a social or charitable nature, or

(b) undertake occasional work of a literary, artistic or scientific character,or

(c) participate in sports activities as an amateur, or

(d) take part in the registration, promotion or management (not involving the holding of an elective office) of a literary, scientific or charitable society or of a club or similar organisation, the aims or objects of which relate to promotion of sports, cultural or recreational activities, registered under the Societies Registration Act, 1860 (21 of 1860), or any other law for the time being in force, or

(e) take part in the registration, promotion or management (not involving the holding of elective office) of a co-operative society substantially for the benefit of Government servants, registered under the Co-operative Societies Act, 1912 (2 of 1912), or any other law for the time being in force:
Provided that: –

(i) he shall discontinue taking part in such activities, if so directed by the Government; and

(ii) in a case falling under clause (d) or clause(e) of this sub-rule, his official duties shall not suffer thereby and he shall, within a period of one month of his taking part in such activity, report to the Government giving details of the nature of his participation.

(3) Every Government servant shall report to the Government if any member of his family is engaged in a trade or business or owns or manages an insurance agency or commission agency.

(4) Unless otherwise provided by general or special orders of the Government, no Government servant may accept any fee for any work done by him for any private or public body or any private person without the sanction of the prescribed authority.EXPLANATION- The term ‘fee’ used here shall have the meaning assigned to it in Fundamental Rule 9 (6-A).

Click to Read : Provisions of rule 15 regarding the holding of elective office by Government servants in Co-operative Societies

DOPT – CCS (Conduct) Rules, 1964 – Revision in limit for intimation in respect of transactions in sale and purchase of shares, securities, debentures

Subject: CCS (Conduct) Rules, 1964 – Revision in limit for intimation in respect of transactions in sale and purchase of shares, securities, debentures etc.

The undersigned is directed to refer to this Department’s O.M. No. 11013/6/91-Ests.(A) dated 08.04.1992 prescribing the following limit of transactions in shares, securities, debentures or mutual funds scheme, etc for intimation to Government in a prescribed format:

(i) Group ‘A’ and ‘B’ Officers – If the total transaction in shares, securities, debentures or mutual funds scheme etc. exceeds Rs. 50,000/- during the calendar year.

(Satish Kumar)
Under Secretary to the Govt. of India