Spite and Malice is a traditional Solitaire style card game, stemming from the classic game of Crapette. This game takes influence from influence, injecting competitive elements that make it much more fun. In fact, a commercial variation was eventually released by Hasbro in 2002. The game is also referred to as Cat and Mouse.

How to PlaySpite and Malice?

Spite and Malice can be played with two players and above. All you need to play the game are multiple standard 52-card Anglo American decks with 2 Jokers each. For each player in the game, one deck is required. For example, if 3 players are playing, 3 52-card decks are to be used.

The following examples assume a standard setup of Spite and Malice with 2 players.

Since Spite and Malice is a puzzle-style game like Solitaire,and hence uses card ranks where Aces are the lowest and Kings are the highest.Note that scoring is not used during gameplay, hence, the relevance of cardranks are solely for the puzzling aspect.

Suits are not relevant in Spite and Malice.

All decks are shuffled together and thencut by each player. A dealer is then selected, either by deck splitting or atrandom.

The dealer then deals 26 cards to eachplayer. These cards are set aside to form each player’s goal pile. These cardscannot be viewed by their corresponding player.

The top card of each goal pile is turnedface up, and placed on top of the pile.

The remaining cards are then placedface-down at the centre of the board, forming the stock or the draw pile.

Each player beginstheir turn by drawing cards from the draw pile until their hands consist of 5cards each. This process will repeat for each turn, with each player drawingthe needed number of cards to replenish their hand.

For example, if aplayer ended their previous turn with 3 cards, they will draw 2 cards to refilltheir hand to 5 cards.

Note that it ispossible for players to play all 5 cards from hand before the turn ends. Ifthis happens, the player will draw 5 cards from the draw pile.

After replenishingtheir hand, players will make any possible plays to the sequences on the board.Like in Solitaire, players need to create sequences beginning with Aces, andsequentially ascending card-by-card until Kings are played to complete the set.

If Aces are ever drawnor revealed from the goal pile, they are played immediately.

Once a set iscompleted from Aces to Kings, it is set aside. These cards will not be used inplay until the draw pile has been depleted. Once the draw pile is depleted, allcompleted sets so far are shuffled and returned to form the new draw pile.

Once a player decidesto end their turn, they discard one card from their hand. Discards are made tothe discard piles. Each player has 4 discard piles each, and players can onlyplay the top card of each discard pile before gaining access to the bottomcards.

Discarding will alwaysend a turn.

Sets are shared amongall players, and players can play their cards onto any available set,regardless of who started the set. 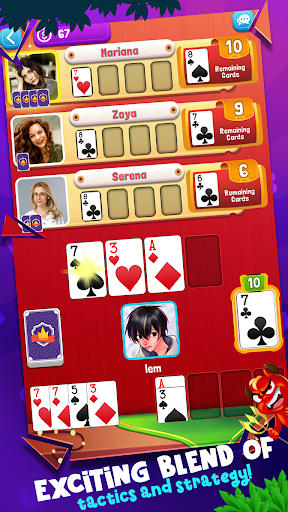 In Spite and Malice, Jokersare wild cards, and can be played in place of any other card. This includes theAces used in starting new sets as well.

The first player to clear their entire goalpile will win the game. The final card can be won via a play onto a set, or bya discard.

The Spite and Malice rules are:

Spite and Malice scoring is based on the completion of the goal and the number of remainingcards.

A player who managesto clear their goal pile will be awarded 5 points.

When a player wins theround, they are also awarded points based on the number of remaining cards intheir opponent’s goal piles.

For example, in a2-player game, if Player 1 wins the round, and Player 2 has 6 cards left intheir draw pile, Player 1 is awarded 5+6=11 points in total.

The following is an example play in Spite and Malice with 2players.

At this stage, Player B begins by playing the A♥, beginning a new set. There are no more available plays, and Player B discards his J♦.

Player A has a 2♦ atop his/her goal pile and plays that card. The next revealed card is an A♦, and Player A creates a new set. Using the 3♣, 2♤ from hand, he/she adds to the sets.

Player A no longer has plays and discards acard to end their turn.

Player B draws a new card and the gameproceeds as usual.

If you’re interested in playing Spite and Malice online, consider trying out the simulators on Gamefools and GameTwist, which both support multiplayer play.

Furthermore, you will also be able to findgames available for download online as well as a variety of free apps.

How manycards are dealt at the start of each game?

At the start of each game, each player isdealt 26 cards to their goal piles, and 5 cards to hand.

What areother names for the game?

Other names for Spite and Malice are Cat and Mouse, the Misery card game and Spike and Malice.

What is theorigin of Spite and Malice?

Spite and Malice takes influence from the 19th century Crapette game, which originated from Brazil and Portugal.

Are there alternate rules in Spite and Malice?

If a faster-paced game is desired, goal pile size can be reduced to 13 cards instead, resulting in quicker games.