Move over photo to zoom. Uniross USB Battery Charger for 2 AAA Rechargeable NiMH Batteries 1.2v 1000mAh. Instructions for Use. An intelligent charger that quickly powers any device battery. This charger caters to varying battery geometries used in different devices. Its intelligent design not only docks the battery securely but also provides uniform charging to all batteries.

18 years
Sussex, UK
Hi all
Having had a pile of problems with NiMH batteries, the *ist-D and the grip, I found that Uniross now do a special CR-V3 rechargeable.
The Li-Ion batteries are 3.7V, but Uniross have separated the charging pin, so presumably they include a diode to reduce it to 3.0V. They claim 100% compatible with normal Lithium CR-V3, and specifically mention the Pentax *ist-D.
They are 1300mAh - but don't compare this to 1300mAh NiMHs! The NiMHs only produce 2.4V maximum, so with these Uniross CR-V3 you end up with 0.6V more headroom, and consequently more shots. I strongly suspect they will outperform 2500mAh NiMHs... but I'll let you know
Ordered them yesterday from PicStop:
http://www.picstop.co.uk/Battery-Charger/Uniross-Sprint-CR-V3-Li-Ion-Battery-Cha...
Only downside is they use a regular linear power supply, which weighs a ton! (Produces 12V, 500mA - and I thankfullly have a switch mode version). Also includes car adapters
Have a couple of important events to cover over the next week or so - will get back with a progress report...
Matt
I'll be very interested to know how well these perform as the price is very reasonable when you compare it to the price of non rechargeable lithium battery - about 50% more plus the charger. I've also been having problems with regular AA Ni-MH cells as it seems that often one of the 4 cells looses charge quite quickly which causes the camera to stop functioning. Sometimes turning off and turning back on again helps to get a few more shots but it isn't very satisfactory. Unfortunately I don't have a charger that can only charge one cell at a time so end up having to charge a pair and I'm not sure what effect this has on the good cell.
Steve

FWIW, Palo.co.uk has the batteries at only £6.49 ea inc VAT with reasonable postage charges - £3.75 for 2 batteries.
I haven't used this company before - has anyone else?
Added later:
They also advertise on ebay - only £5.99 buy it now and £2.00 for postage. Also good feedback.
And before anyone asks, no I don't work for them (but if they want to send me some samples . . . )

18 years
Sussex, UK
Ok, quick progress on the batteries...
I bought 2 kits (charger + battery) and 2 extra batteries. The charger itself is very light and small. It can be powered by an included 12V car adapter, or by a hunking great plug top charger (if you travel, get a decent 12V 500mA switch mode supply - 7dayshop do them). The batteries have three contacts - the two that connect to the camera, and a small one in the middle that is the charging pin. When measured, there was about 0.6v difference between the '+' and this pin (because Li-Ion cells are 3.7v, and you need 3v to be compatible with Lithiums).
When freshly charged I thought they seemed to have a little too high a voltage. The autofocus was incredibly quick on the *ist-D and seemed to have more torque. They measured at higher than 3V, but that was with no load. However, exposure and everything else was absolute perfect. I did double, triple check that Uniross claimed it was '100% compatible'. So, after a little apprehension I went ahead...
Too a few hundred shots at a wedding on Saturday. I was really slamming the *ist-D, using the LCD quite a bit and generally giving it some hassle. And what do you know? The battery meter still shows fully charged. Awesome!
At the same time I used an *ist-DS (fitted with a bright prime). This had NiMHs installed which died during the ceremony (great ). Quick change over to the other set of CR-V3s, and that too just kept running.
At home I fed the NiMHs to a charger, and it turned out that one AA was seriously flat and had let the whole pack down. Used this charger: http://www.picstop.co.uk/Battery-Charger/Ansmann-Energy-8-High-Tech-Desktop-Char... - which I can highly recommend! I've used it to refresh all my NiMHs and it showed up two or three cells that hadn't been properly charged in the other chargers (which charge in pairs).
So, all in all, I'm sold on the CR-V3's!
Have another do to cover next weekend... and I'll be using them for that!
Matt
Hello,
Not been on the forum for a while but saw this and thought you might like to here my experience.
I use CR-V3's. They are great, brilliant in fact. I would have though most people would use these. They last forever. NiMH run out so quick.
But the rechargable CR-v3 start to die out after a while and then dont hold their charge aswell (as is the case with most rechargables i think).
I think in thre long run they might be more costs effiecent but the price of the recharbales is quite high when you can get standard CR-V3's from onedayshop for not that much. Having the recharables run out is a bit of a pain and they can suddenly fade quite quick.
I would recommend stickking to normal CR-V3's
rechargeable's expensive???
I use 2100mAh NiMH's which I buy for Euro. 2,50 for 4 pieces. So I don't mind taking 2 sets with me. Charging takes 1,5 hours and the lifetime is pretty long ( I don't use the built in flash much).
I have never ran out of power in a bad moment and just in case I allways have the set of lithium batteries that came with the camera in my case.
NiMH is the most cost effective way of powering your camera. Camera:K20D Ist*DS Spotmatic II MZ-10
Pentax Lenses: DA16-45 DA50-200 50A 1.7
Tamron Lenses: 28-200
Takumar Lenses: SMC 55 1.8
Sigma Lenses: EX DG 50-500 'Bigma' EX 50mm Macro
Flashes: Metz 58 AF-1 Samsung SEF-36PZF Pentax AF-220T

18 years
Sussex, UK
Rechargeable CR-V3 batteries, which are Lithium Ion (Li-Ion).
Just to reiterate what I've said above - I've had all kinds of problems with AA NiMH batteries (all ratings and different manufacturers, but the worst was 7dayshop 2500mAh - but read on!).
So I went for the rechargeable CR-V3 batteries (2 chargers and 4 batteries). Now these have, so far, been absolutely great. Time will tell whether these particular Uniross ones will degrade over time...
But, as I mentioned, I've also been using the Ansmann Energy 8 charger. I put all my NiMH AAs through it and discovered that some of them had a much lower than the others. Having charged them through this, all my AA batteries are performing much better.
Most chargers work with a pair of AAs, and if there's one cell slightly down they don't seem to be able to get them both charged. Perhaps if you left them trickle charging this would resolve, but certainly not in the fast charge cycles... with the Energy 8 charger it charges them individually (ie you can put in one AA, or 3. Up to 6).
Food for thought anyway
Matt

18 years
Tyldesley, Manchester
We were out all day yesterday with the *istDS cameras switched on virtually all the time, shot maybe a hundred pictures each, and at the end of the day the batteries were still giving a fully charged symbol on the camera. And these had been used the previous weekend. We don't have a problem with NiMH batteries.
Maybe some chargers are not effective as you say.
Otherwise, following the instructions seems to work! (Now there's a thought.... ) Best regards, John

15 years
Buckinghamshire
I remember seeing a discussion somewhere which suggested that fast chargers were less reliable than slow chargers - in that a slow charger charges each cell individually. I use uniross 2500 mAh AA batteries and use a slow charger at home, and only use the fast charger with a car adapter for emergency recharging on the road. I have no complaints about the lifetime of my batteries! Tim the Ammonyte
--------------
K10D & sundry toys
http://www.ammonyte.com/photos.html

18 years
Sussex, UK
Funnily enough (and contrary to John's insinuation ) I had tried charging all my batteries on a slow, single charger at home. But it just didn't do the job.
The Ansmann one is a fast charger - but still charges individually. Plus it works out the health of the battery first and indicates its charge (which is what showed up the problem AAs).
Others may never have a problem, in fact I didn't until recently. But when those batteries die, it's a real, real pain
Matt

18 years
Tyldesley, Manchester
It does read like that, doesn't it? Not intended as an insinuation, more a general comment, but I stand suitably chastened! Best regards, John 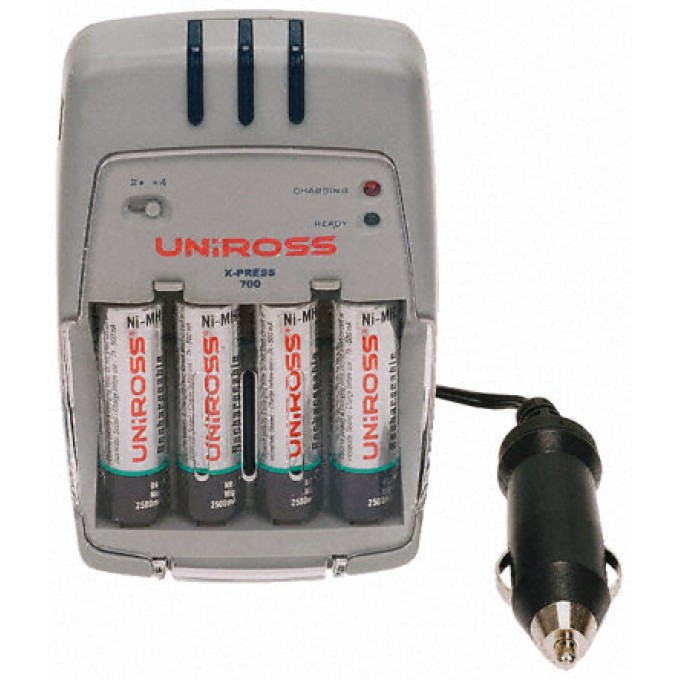 interesting thing from the pentax website (i think most of the rechargeable CRV-3s on ebay are one of these designations)
Q. What types of batteries are available for *ist D?
A. The *ist D can be powered by the two CR-V3 lithium batteries, four AA lithium battery, AA Ni-MH rechargeable and nickel batteries, or AA alkaline batteries.
Note: We do not recommend using rechargeable CR-V3 batteries with our digital cameras due to issues with the output voltage. Specifically, avoid rechargeable CR-V3 batteries with these designations: RCR-V3, CR-VX, BP-11.
I have bought the rechargeable Uniross CR V3 's but not yet used them. I doubt that Uniross would recommend them for all cameras using a CR V3 set of batteries without ensuring full compatibility, otherwise if they did any damage to your camera you would have a claim against them under the sale of goods act. As tests so far seem to indicate they work just fine, then I have no problems and will use them just as soon as my current batteries run out. I'm actually using the original CR V3's that came with my *istds at the moment as I had no normal AA rechargeables with me last time I was out and needed to change.
Pentax will just be covering themselves in case anyone stuck some cheap rechargeables in that were not fully compatible.
Philip
i'm trying out some cheap CRV-3 from ebay - powerplus i think they're called (who?)
£2 each, which seems worthwhile if they have any kind of life. I ran out my rechargeable AAs at brands a couple of weekends ago and spent £10 on two four packs on duracell sooper doopers. First set lasted 250 pics then kept having to turn camera off and on to get another three pics...
so i'd expect the CRV3s at £2 each to last better than that!
I use Varta Photo 15 minute Charger Photo Akku Charger (2.300 mAh) and since I bought these I have to charge very infrequently. Comes with a car charger too. Noisy (because of built in fan), but works very well. Mine charges 4 at a time, there is a smaller one that does 2 at a time.
You must be registered or logged-in to comment.